Over my years as a special ed teacher, I've often wondered what it would be like to have dyslexia—a learning disorder characterized by difficulty reading.

​At a recent event organized by the Orton Academy in Colorado Springs, I experienced some of the challenges and difficulties facing people with dyslexia. While the sponsors didn't intend to simulate dyslexia precisely—which would be impossible—they designed a series of experiences to show us what a day at school for a kid with dyslexia might be like.

In one exercise, we had to trace a star while not looking at our paper but using only a mirror to guide our hand. This was extremely difficult. I felt like I had no control over my tracing hand. And as you might expect, I started to feel frustrated.

The role-playing "instructors" sought to encourage me and the other "students" by saying things like, “This is easy" and "You learned that in Kindergarten.” But these words actually made me feel worse because they were implying that I should be able to do what I found impossible. I even cursed, and I almost never curse.

Next, we had to listen and take notes on a recording of a teacher speaking to her class on a field trip. In addition to a very low volume level, the audio was made more distracting with other teachers' voices. So, to understand our teacher's instructions, we had to filter out the noise and identify and focus on her voice only.

I could not hear or understand much and wasn't able to put a single word on paper. Distracted and bored, I started doodling. And when I looked around and saw some of my fellow "students" had managed to write quite a bit, I started to compare myself negatively to them.

The teacher tried to encourage me and other slow note-takers by saying, “You can do it!” I unconsciously responded “No I can’t.” Now I was getting cheeky—and that's as unlike me as cursing, unless I'm in a stressful situation.

Next, the instructor exclaimed, “If you don’t finish, you stay in for recess.” She bent over me, and said harshly, “Stop doodling, get to work.”

That was a realistic response from a busy, stressed teacher. But even as an adult, just pretending to have dyslexia, I was hurt. I got the message: you're either not as smart or capable as the other students, or you're lazy.

As challenging as those exercises were, the short-story exercise was the most nerve wracking of all. We had to read a short story written with letters that were all reversed, like in a mirror. We received a one-minute instruction in how to decode these, and then the teacher started calling on us to read aloud.

Anxiety rippled through our little group of students. In my head, I prayed silently for the teacher to skip me. By the time it was my turn, I stumbled through the text. Others did better, and I felt bad about myself. Then the teacher asked us what the story was about. I had no clue. I was so focused on just reading the words, I paid no attention to the story.

So what did I learn in this frustrating three-hour process?

- Learning with dyslexia is different than learning without dyslexia. Unless teachers know how to modify their instruction for students with dyslexia, those students will feel frustrated, anxious and may develop a negative self-image.

-Students with dyslexia may need more time to finish an assignment.

-They may need multi-sensory teaching that involves movement, vision and hearing.

-They may need to work in an environment without distractions.

-They will probably feel anxious and intimidated when asked to read aloud to their classmates.

-Hearing things like, “this is easy” or even “you can do it,” may be taken as put-downs rather than encouragement.

-The worst tactic I experienced was the threat of losing recess. Kids need recess and should always get a chance to play, connect with their peers, and move their bodies. Threatening to take that bit of escape away from them does not give them the ability to work faster.

The Orton Academy will offer more of these simulations, and I encourage any teacher or parent to use this opportunity to gain greater empathy and understanding for what students with dyslexia go through. 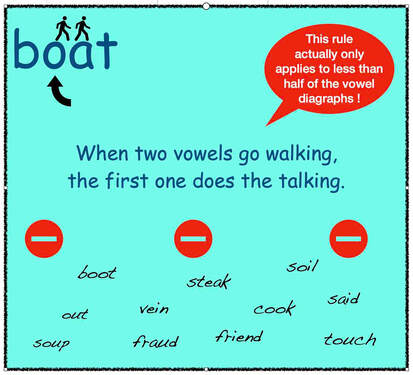 The other day, one of my students tried to read the word chief. We were practicing words with the sound of “ee,” such as meet, seat, and key. She read all the words perfectly—until she got to chief.

For a few moments, she was quiet. Then she said, “That doesn’t make sense. When two vowels go walking, the first one does the talking.”

She was reciting a rule that is commonly taught in school to help students learn to decode words. But while it’s a catchy rhyme, it confuses and confounds students as often as it helps. That’s because it only applies to about half of the English words with vowel diagraphs.

Sometimes the first vowel “does the talking” by saying its name, as in the words boat and rain.  But not in chief and many many other words, including: out, steak, vein, bread, said, friend, fraud, soil, boot, soup, cook and touch.

Would you teach something as a rule if it was only true half the time? You wouldn’t. But unfortunately, many school classrooms still use this and other rules that don’t hold true much of the time. For most learners, this is not a major barrier as their abilities allow them to memorize the (many) exceptions. But for students with reading difficulties, these rules are landmines that deter their progress in reading and undermine their confidence.

Students learn the sound pictures for each sound, and they learn the important skill of phoneme manipulation—the ability to take sounds in and out of words. For example, the sound picture “ea” represents three different sounds, “e” as in bread, “ay” as in steak, and “ee” as in seat. Students who learn to read with Phono-Graphix are taught to try all three sounds when reading an unfamiliar word containing the sound picture “ea.”

They then figure out which is correct from the context. In the phrase “a loaf of bread,” they would use their oral language skills to ascertain that “ay” and “ee” can’t be correct because no one says “a loaf of braid” or “a loaf of breed.” So “e” must be the correct phoneme for this word.

With Phono-Graphix, there are no rules or exceptions to rules to confuse students: just straightforward simple decoding.
​